A new Star Wars Map I've been working on. This is a representation of the iconic Star Wars location after the invasion by the Yuuzhan Vong, the villains from the New Jedi Order Series.

This map is a private commission that was part of a reward package for the kickstarter drive.

Personal thoughts on the map: It's one of my best. Artistically, It may be my best. The details in the computer screens are staggering, thanks to some new brushes I used, as well as the flora on the the east side of the map.

The giant monster plants, admittedly, are a rip from the DUNDJINNI forums, They were PERFECT for this map though, and I felt like I would be doing myself and the client a disservice not adding them to the map.

The map was collaboration with the client, and he was gracious enough o give me a very long leash and it really gave me a lot of options for theme, art, mood, and layout.

In my own history I believe this map is going to be one of my landmark projects. It is sad that the game is so far in decline, As I believe that in the heyday of the game and it's community,this map would've made major waves.

I have very high hopes that this map will be part of map pack 5, whoever may end up taking control of the project. 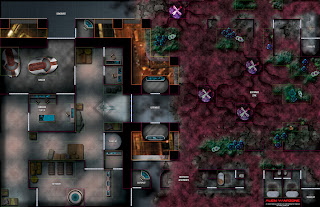 Matt Francella
Newport News, Virginia, United States
I was inspired a few years ago to create maps for games that I love. It's developed into a passion and lucrative hobby.